Episode Two - James T Cook and the Spiders from Mars

The Admiralty's orders were to search through the abandoned cities of Mars to make sure that the Martians aren’t rearming.

“Space the new frontier.  These are the voyages of the Her Majesty’s Star Ship Endeavour.  Its five year mission: to explore strange new worlds; to seek out new life and new civilisations; to boldly go where no Englishman has gone before.”- Captain James T Cook

The HMSS Endeavour has reached Mars orbit with no problems. The trip from Earth was uneventful and there appeared to be no Martian defences in orbit.

Examination of the surface of Mars showed a dry and dismal planet with cities and towns crowded next to those canals still flowing with water from either of the north or south poles. The cities all seemed to be covered with a permanent fog of some sort. We could see no movement that you would expect from a vigorous civilisation and I suspected that the Martians had been fully destroyed by the diseases from Earth.

Nonetheless I followed my orders and seeing a city with a large space port descended in the landing ship for a closer inspection. 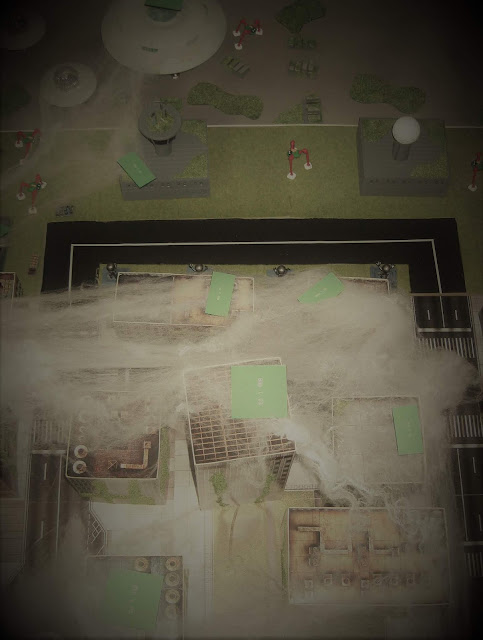 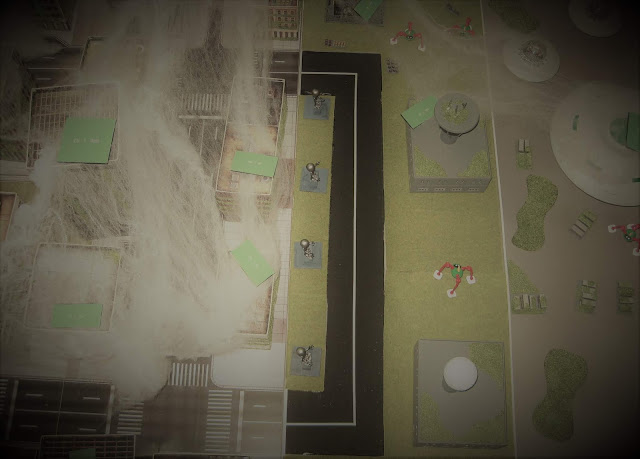 As we came closer we realised the cities were not covered with fog but some sort of substance that moved slowly in the breeze. As we came down to land our Science Officer Dr Banks made a startled noise and said “Captain, it isn’t fog, its spider web! Spiders that hitched a ride back to Mars on the Martian ships would quickly spread and multiply with no natural predators. With Mar’s lower gravity they may even grow to the size of a small dog!”

We quickly warned the crew to be ready for large spiders.

The team disembarked and secured the landing zone with the Gatling guns. 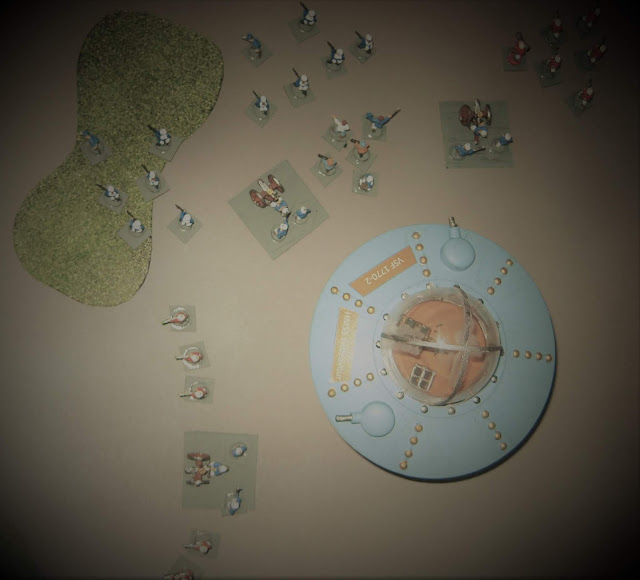 I ordered the men to move out. We were organised into teams of five. A team of five Marines anchored each of our flanks, each Marine with a Radium rifle and the sergeants with mini-gatlings. Two teams of five crew armed with rifles and a team consisting of myself, Science Officers Dr Banks and Mr Solander, an artist and Cheerful Rodgers who insisted on coming. 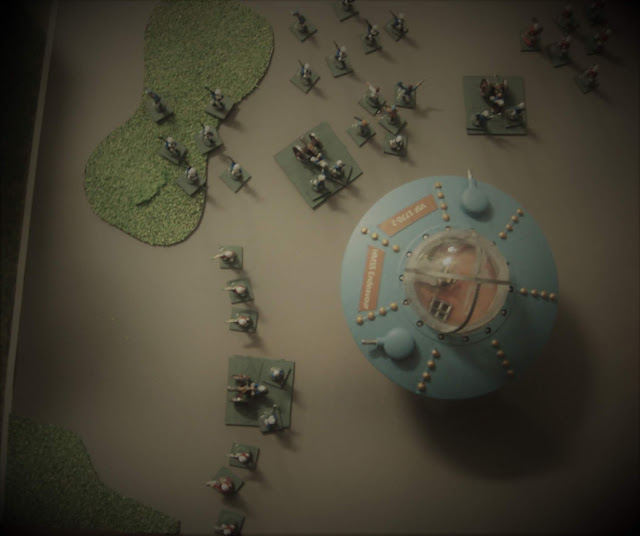 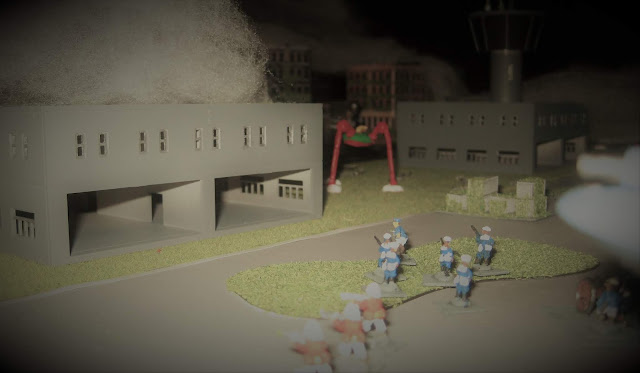 The crew on the left flank entered a building and they were assaulted by enormous spiders. “The size of a small dog hey Dr Banks!! They are small elephants!” They lost two crew members before they could overcome the hideous monsters. 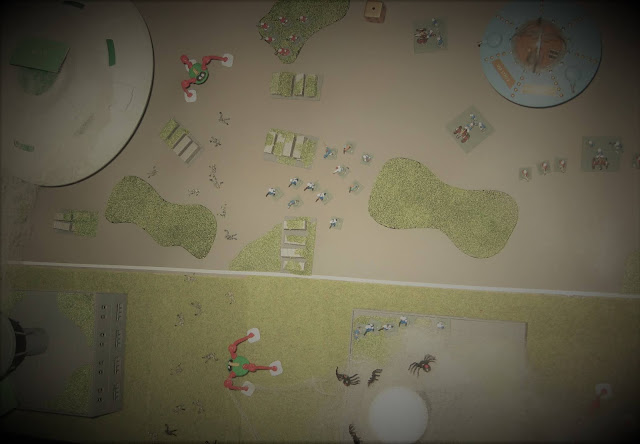 The ground was covered in the skeletons of dead Martians, while there was a lot of equipment lying around, it all seemed abandoned. There were a number of those nasty Martian tripods but they were all inactive.

I urged my men forward past these gruesome sights. 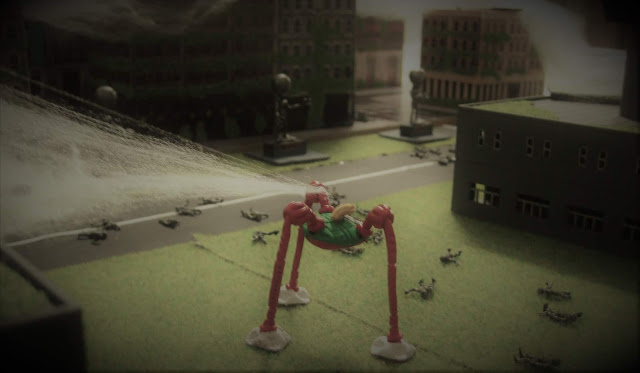 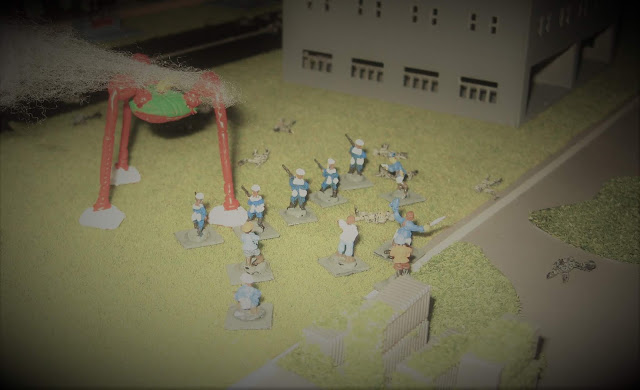 On the right flank the Marines entered the spaceship and were immediately assaulted by spiders! 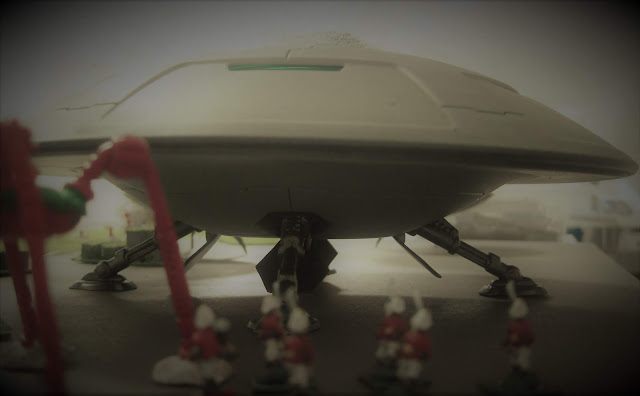 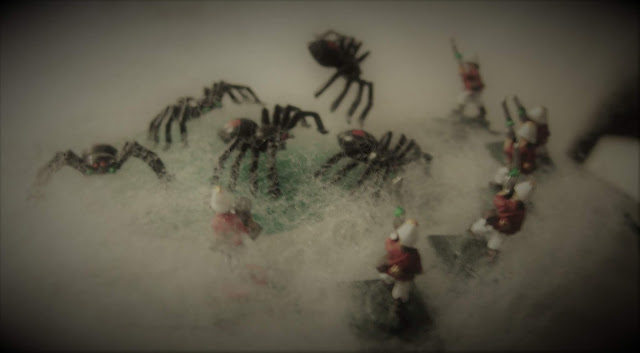 The Marines lost two men to the evil creatures. 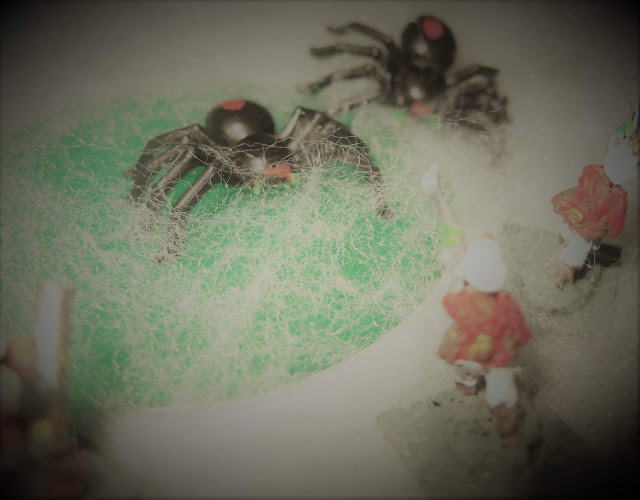 In the middle the crew cautiously entered the building. Forewarned by the others they did not rush in and were able to fire at the spiders from long range killing two before the spiders were able to attack. 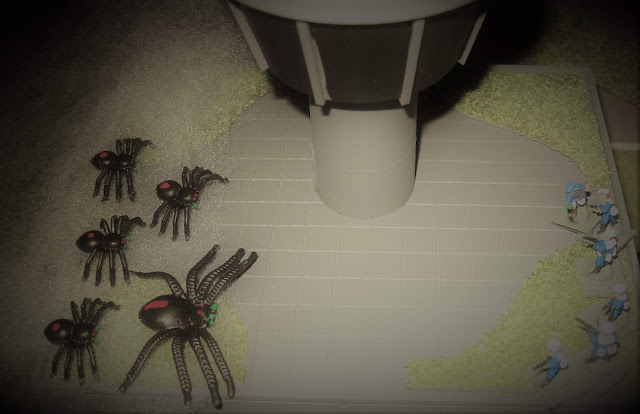 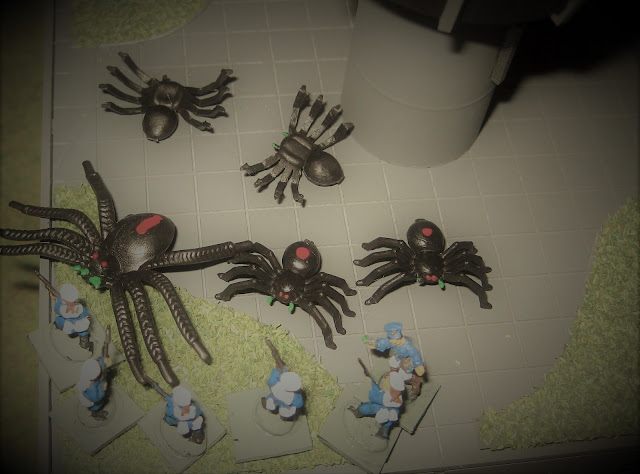 Meanwhile my team investigated the large road through the city. The Martians certainly know how to build. The street was lined with statues, probably of their evil gods or leaders. (Editor – after 50 years of research they were found to be a musical group.) 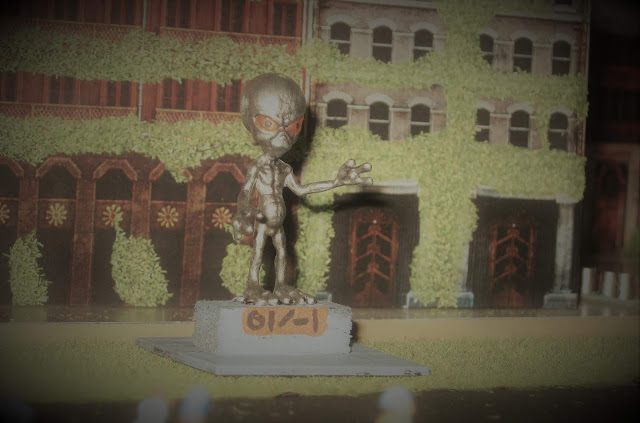 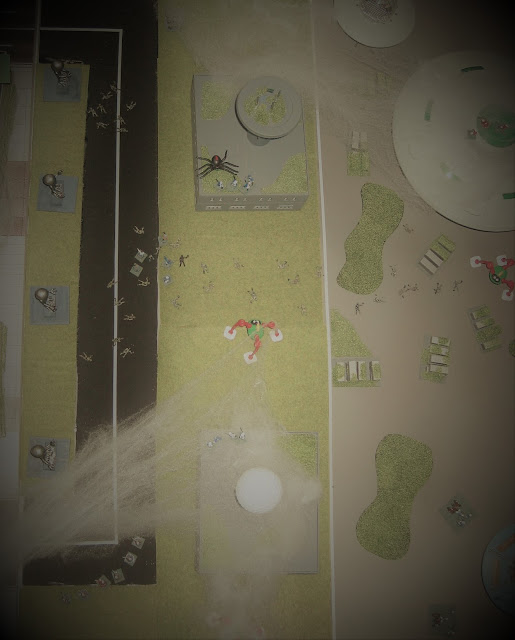 Scanning the buildings along the street we saw a dreadful sight. Martians! As well as another lot of spiders.

While the spiders attacked us the Martians ran away – cowards!


We quickly eliminated the spiders but lost our artist killed in the process. (Editor – I used the “red shirt rule” here to kill the least important character) 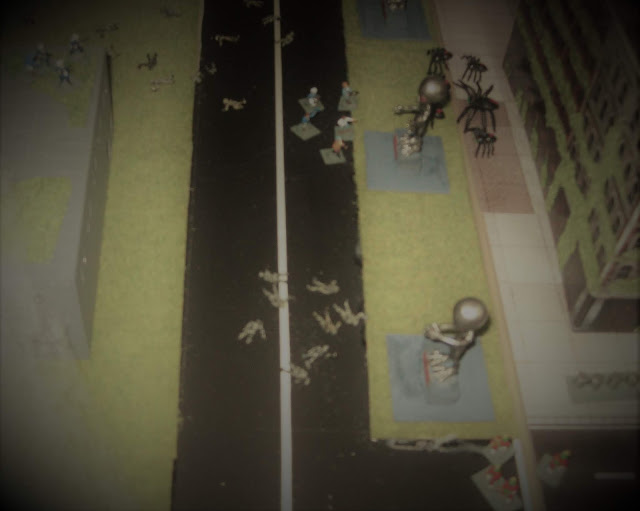 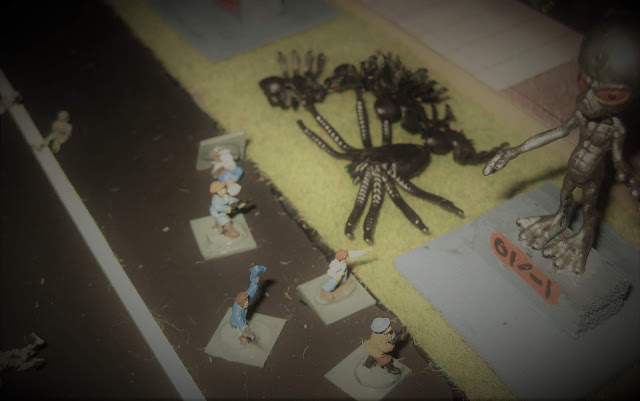 I ordered the teams to get the Martians and we chased them. 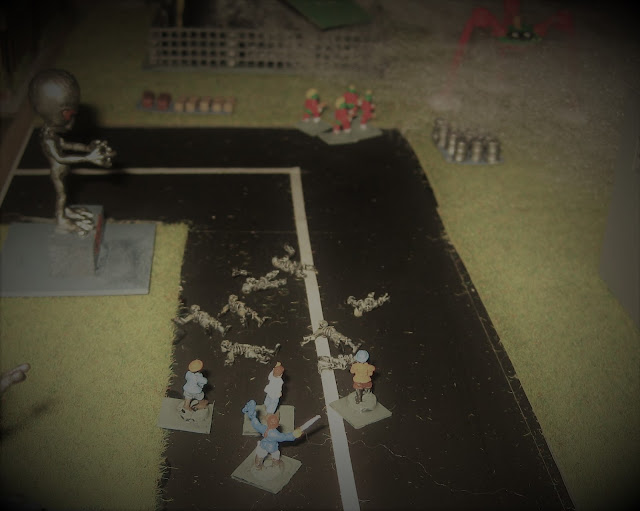 However, there were more Martians there. One of the small flyers took off and moved towards the fleeing Martians to pick them up and escape. 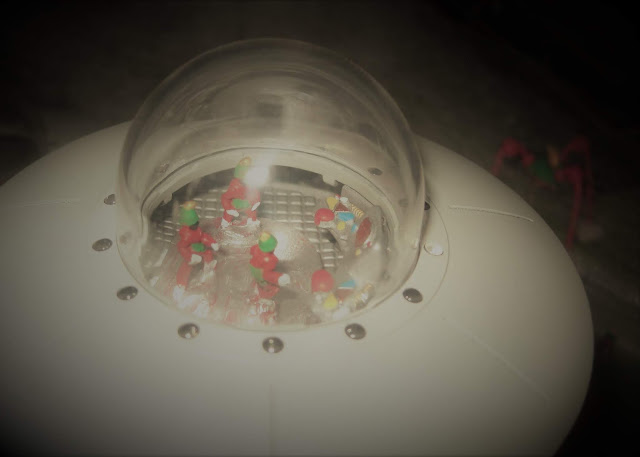 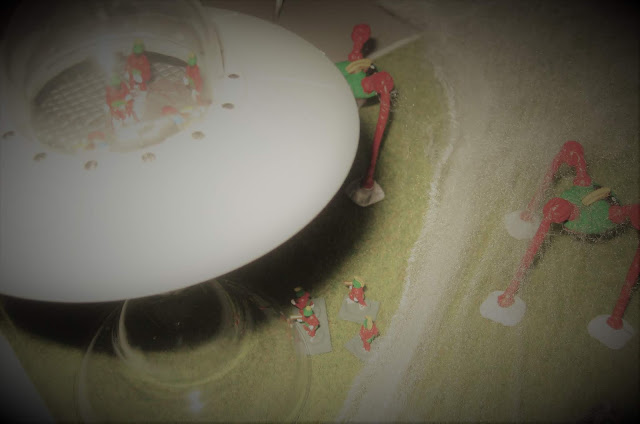 The Marines on the large space ship took up positions and opened fire on the flyer and scored two hits but no damage. 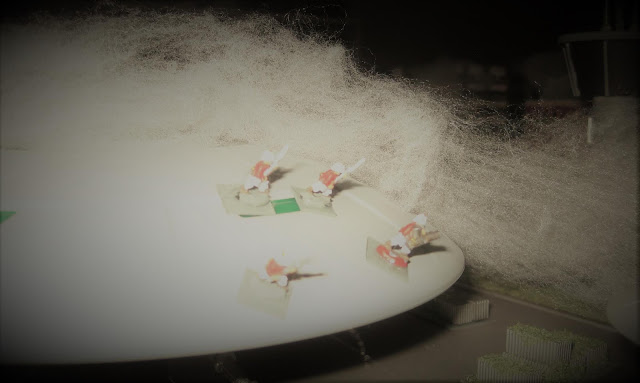 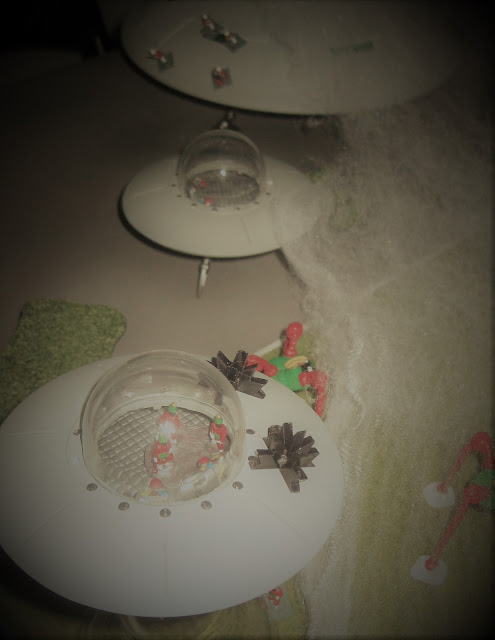 The Martian flyer landed and the fleeing Martians boarded the flyer. We now only had a short time to get them before they escaped. 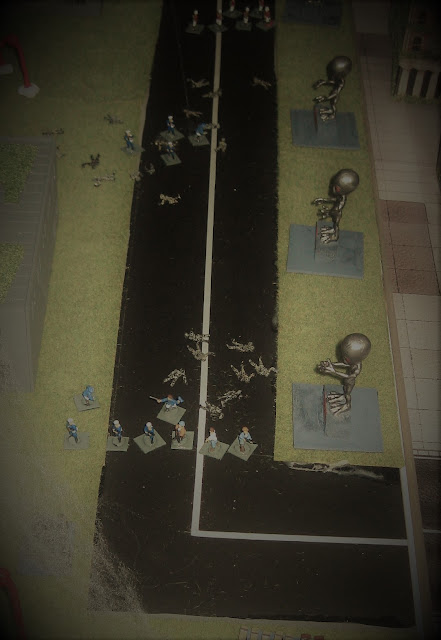 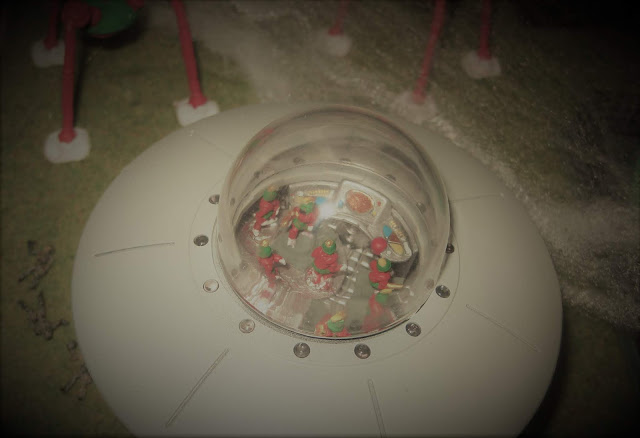 The Marine squad on top of the large spaceship, the sergeant opened up with his mini-gatling gun and the flyer exploded killing all aboard. 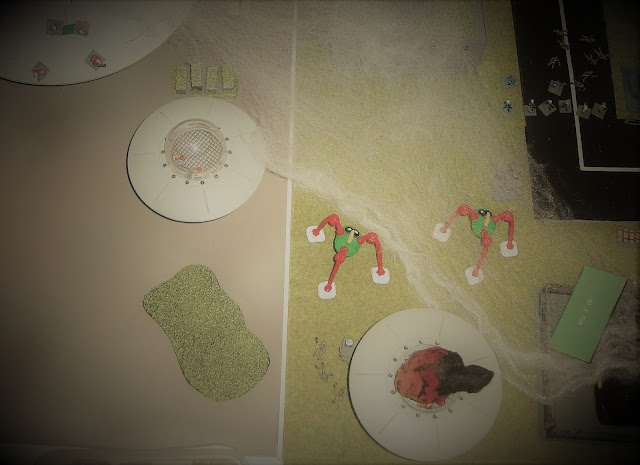 We inspected the burning machine to ensure it was completely destroyed 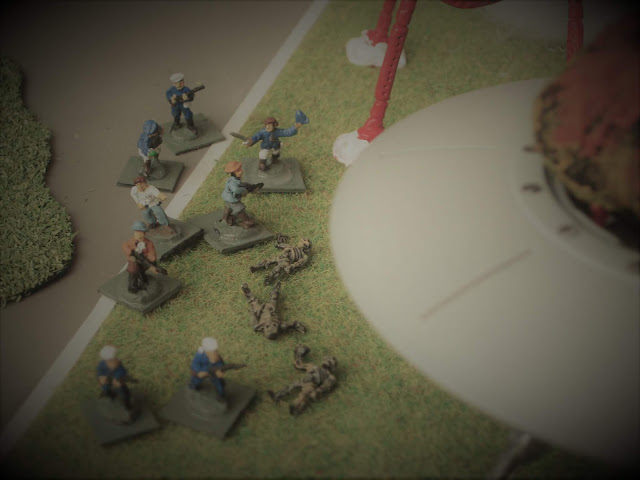 I have sent a summary to the Admiralty and recommended they set up a base here to recover the Martian technology. A large infantry battalion will be required to clear out the spiders and a convict crew to burn off the webs.

Admiral Burns - reading the Aethergram from the Endeavour "Excellent, excellent. We shall do as Cook recommends and open a base. This expedition has already proved its worth!"

Notes on the game.
Rule FUBARs with VSF additions.
Played over 10 turns with hidden and random deployment of the Martians and spiders. Small green markers indicated one lot of enemy (spiders or Martians) a large green marker indicated two lots.
Posted by Ben Cato at 04:10 No comments:

Mushroom forest and the crew of the HMSS Endeavour


Somewhere in the Solar System, the away team of the HMSS Endeavour, led by their intrepid leader Captain James T Cook, warily approach an alien village through the surrounding mushroom forests.

Figures from Pendraken, mushrooms from AliExpress, village part of a paper card castle that is not yet completed.