I am taking a break from blogging for the rest of the year due other things happening in my life.

As the sound of the toot DroneZ faded into the distance, with only the crackling flames and small explosions remaining as a memory of the battle a new wave of sound approached.

Somehow toot had moved a significant force of HumanZ, BusZ and TankZ past the guards and into assault positions. Only just in time were the ferals able to organise their defence after being warned by the early toot DroneZ attack.

toot forces rush forward while ferals forces wipe the sleep from their eyes and move into firing positions in each building. 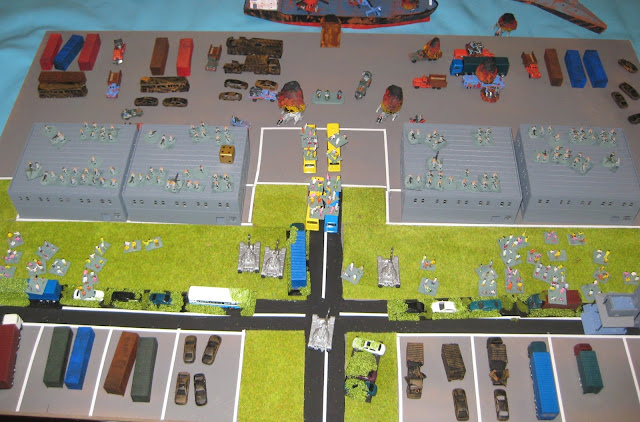 toot BusZ and TankZ move through the centre of the battlefield, smashing feral bikes, utes and trucks. On the flanks the HumanZ assault the feral buildings. The right side of the feral port gets the most attention and many humans are destroyed by the zombie like HumanZ.

On the left side, concentrated fire power destroys most of the HumanZ and their assault fails.


The end of the final turn, the toot forces have been almost totally destroyed, only one TankZ and one BusZ are left and decide that the intelligence they contain in their memories is more valuable than any additional feral casualties, therefore they make a quick exit. 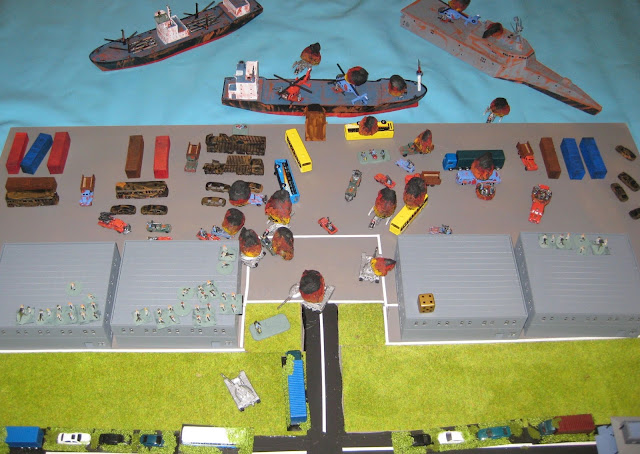 While the ferals claim a victory the explosions and fires show the cost.


A view from the sea, flame engulfs the port.

HumanZ casualties are terrible but toot knows there are plenty of them and more are ready each year.

Rules: I use Fubar SciFi rules. toot HumanZ bases count as one figure, the feral infantry count a figure for every model.

toot are always elite so move and fire most turns.

toot server main control unit. - the HumanZ have failed once again against the feral. It is time to start producing the RoBroZ. Rumours of a new human force continue to appear, nothing certain yet, but it does not pay to be unprepared. Orders go out to start building RoBroZ as well as to refurbish a space craft at Kennedy Space centre. You don't live forever by ignoring fate.

Once before a single toot DroneZ had attacked the port and destroyed a number of cars and trucks and sunk a ship that the ferals had converted for their use.

Since then, the ferals had kept a constant watch guarding against another attack. As they increased their resources they set up a watch tower on the sunken ship, one on each of their ships and submarine, and also on the tops of the buildings all armed with anti-aircraft machine guns.

Just as well, as early one morning six toot DroneZ attacked from the west in two groups of three.

In this battle the DroneZ will always go first. Only the ferals' AA is active to begin with, the rest of their units can start to activate from turn 3.

The DroneZ move and fire at the AA and destroy three of them plus a feral battle bus.
The remaining feral AA return fire and manage to destroy two DroneZ.

The DroneZ continue their assault and target other feral vehicles. Two feral choppers are destroyed along with a truck and another AA gun is destroyed.

But the DroneZ pay the price of switching targets from the AA too soon and the ferals’ return fire downs three more of the DroneZ.

The remaining DroneZ flees the battlefield.

toot evaluates the data and determines that a further assault will be required. But how soon will that be?

In a little known city on the seaboard, some of the shattered survivors of the merchant marine and the navies of the world gathered together for shelter and mutual protection.

With bulk supplies of essential military and civilian goods they soon became a magnet for any of the people who had escaped toot as well as the feral tribes.

In this port, an amphibious warfare ship is joined by a submarine and a general supply ship and small container ship.

The port holds the containers from its last delivery plus some surplus trucks, including the rusting remains of toots trucks that would not submit to their new owners.

One ship in the harbour has sunk but the enterprising humans have turned it into a watch tower.

While the humans are happy with their lot and feel safe from toot, nonetheless their ships and hopes are slowly rusting away. 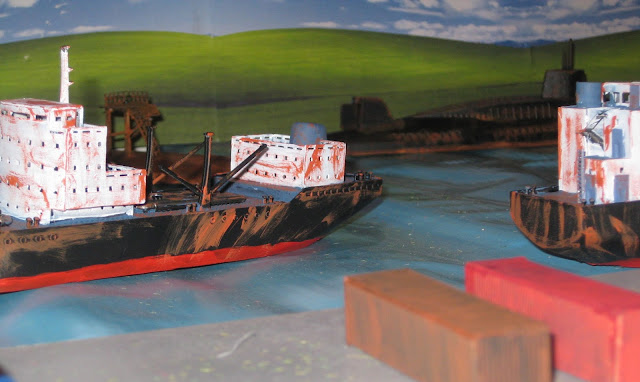 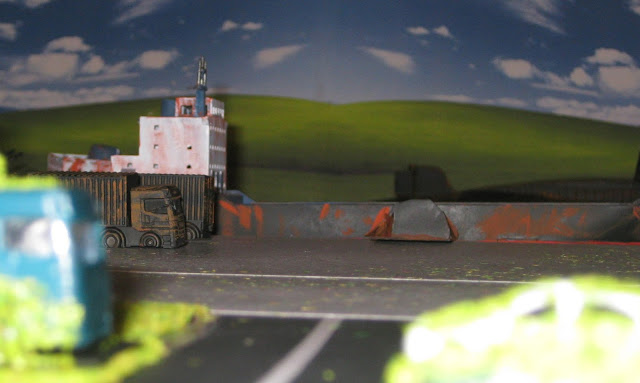 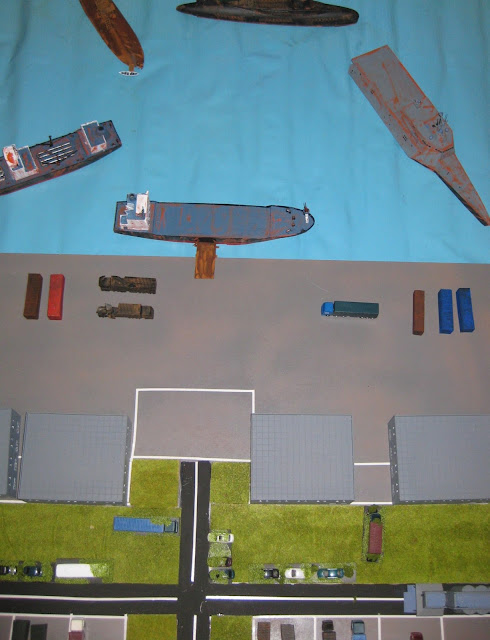 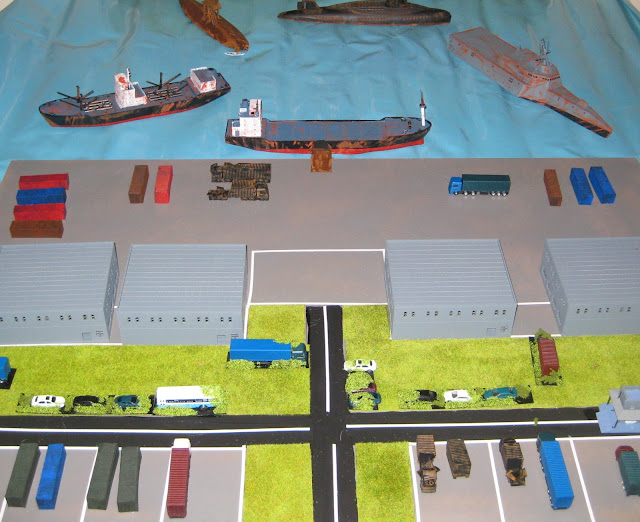 A small town at the end of a road is operating under toot control. Within the town is a gun store that contains much needed supplies required by the feral tribe. The purpose of the raid is to smash our way in, killing anything that opposes us and grab the guns and armoury equipment.

Then we leave before any toot military forces arrive.

Forces
Ferals
One recon unit of motorbikes
One Battlebus
One gun truck
Five utes with guns
One truck to carry the loot
Two squads of infantry in the Battlebus plus a leader.

toot
There are going to be CarZ and HumanZ plus possibly larger units.


Turn 1
The feral convey rolls down the road with bikes in the lead, followed by utes, the battlebus, gun truck, truck and then another ute bringing up the rear.

In the town the toot forces are represented by various “blip” markers and placement will be random.

Turn 2
The motor bikes followed by the convoy enter the town and see two toot forces, some HumanZ and 2 CarZ. The toot forces activate and the CarZ attack the bikes killing one.

Turn 3
The CarZ are destroyed by the utes but the bikes then enter the town and activate all the toot forces in line of sight.

The first HumanZ that had activated, close assault the bikes and kill them both while taking 3 casualties themselves.

The remaining toot forces move towards the invaders.


Turn 4
The ferals try to force entry into the town but are fiercely resisted by the toot forces.

The gun truck enters the town but is immediately attacked by a big rig crashing into it. Both vehicles are damaged.

Two CarZ are destroyed by utes as the ferals move closer to their goal.

The HumanZ take cover in buildings.

Turn 5
The ferals beat off more attacks by CarZ killing three of them.
The CarZ can’t damage the utes unless they attack them from the side and even then only score a glancing hit.

The big rig and gun truck continue to battle it out.

To clear the HumanZ the ferals unload the infantry.

Utes blaze away at the HumanZ in the gun store but do no damage.


Turn 6
The HumanZ in the corner building close assault the infantry in front of them causing 4 casualties while having three bases destroyed.

The Utes firing at the HumanZ in the gun store cause one base casualties so the HumanZ retreat out of sight further into the building.

The big rig is finally destroyed by the gun truck.

Turn 7
The close assault by the HumanZ continues and another base of infantry is killed before the remaining bases of HumanZ are eradicated.

The way is now clear to attack the gun store and the ferals move up their infantry. The trucks and utes take up blocking positions to protect the infantry assault.

Turn 8
The ferals close assault the HumanZ in the gun shop.

The end result is 1 base of ferals is killed and the remaining 5 bases of HumanZ are destroyed.

The ferals have won the battle but paid a terrible price in infantry and bikes. When the enemy outnumbers you by 6 billion you need to be very careful with your losses.

In a server located somewhere deep in the heartland of toot territory toot thinks carefully about the result. The losses in CarZ and HumanZ are irrelevant, worse is the disruption to its plans. More DroneZ and TankZ are required to defend against the feral vehicles, and perhaps raids against their strongholds are also required but HumanZ are very useful in buildings, will these be enough or will toot need to build the RoBroZ?


After the toot apocalypse some of the humans who escaped toot’s round up of humanity joined together in tribes of ferals. These tribes were based around those humans who were “preppers” – people who believed that the end of civilisation was just around the corner. After two centuries of waiting they were finally proved right.

The preppers had built up stores of weapons, food and transport and with these resources were able to grow their tribes by stealing from toot and picking through the detritus of the fallen civilisation.
Many of the tribes took ideas from such apocalyptic films such as Mad Max and this tribe was no exception.

This Feral tribe had grown and could now field an impressive array of weaponry. Whether they would be able to withstand toot’s army of RoBroz only time would tell.

The Feral Convoy heads down the highway. Led by the technicals – utes with guns, followed by the heavy weapons of the trucks, then the battle buses with their gun platforms and carrying squads of infantry.

A close up of the technicals

A close up of the trucks and their big guns

A close up of the battle buses


At the back of the convoy comes the logistics group of trucks.

A close up of a squad of infantry. One team has a RPG, one has a LMG, there is also a MMG team and finally a HMG for anti aircraft protection.

Out in front scouting the terrain is the recon force of motorbikes, each armed with a HMG


On call for close air support is the air wing of this quite sophisticated tribe. Three police and fire department helicopters repurposed with door gunners – so called, because they ride on doors from containers that have been welded to the chopper’s landing skies. Each chopper has one rocket launcher and one HMG.


All technicals, gun trucks, battle buses and bikes are from the Dropzone Commander Resistance range.

The helicopters are converted toys.

With most of the humans safely upgraded to HumanZ many of their airports were abandoned and left to nature by toot.

All the toys are the same as the previous post except that the military aircraft were much cheaper before they were spray painted, detailed and covered with flock.

The look is inspired by a lot of post apocalyptic art work. When looking at photos of long abandoned planes, hardly ever are they covered by any plants growing on their wings. Sometimes reality has no sense of what is appropriate.

Some new terrain for future games.

A small airport that is shared with the military.

As airports are very large I have just taken a small slice. Also I have designed it so that it can be used as a port and a space port as well.

I took some inspiration from the airport at Vladivostok in Russia.

All planes are toys from the $2 shop. Hangers are from Outland Models ebay store with some enlargement of the hanger doors. The middle model with the blue doors is unmodified. Cars, buses and trucks from Aliexpress.
Posted by Ben Cato at 03:03 No comments: