20C - To the Green Fields Beyond Ham - The Battle for Belgium

Part of the Battle for Belgium Series. The English are attacking the German lines outside of Ham seeking to break through to "the Green Fields Beyond"

“Captain Burger, we have received intelligence that the English are going to attack our lines at Ham. They must not breakthrough to the green fields of Ham!!.
“General, I, Captain Burger will hold Ham or die there!”
“Burger, your nation is trusting you, so do not fail. Your forces are:”
Trenches 2 x 15 = 30
Infantry with flamethrowers and torpedo men 2 x 22 = 44
Artillery 1 x 28 = 28
Total 102 points 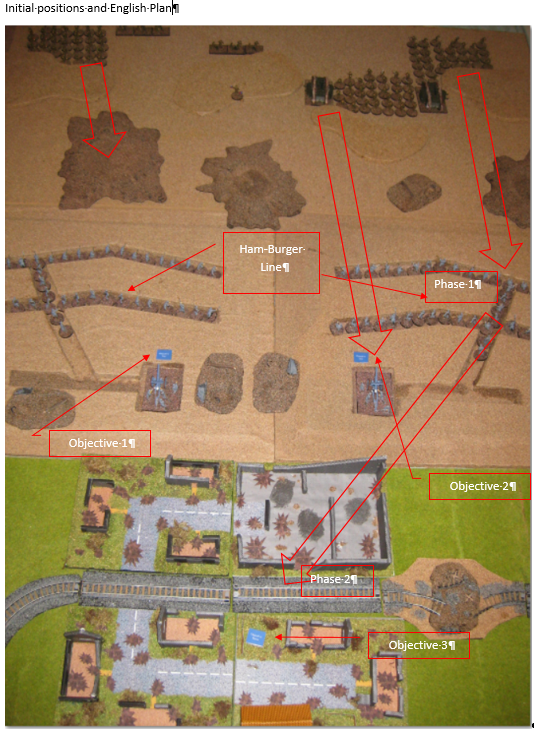 Haggis's plan was to concentrate on the right hand flank. Both tanks and two of the infantry platoons were to capture the German trench and then move into the town of Ham. Once outflanked he was sure the Germans would retreat on the left.
The left flank would be held by one infantry platoon supported by the HMGs.
The mortars would stay out of sight and their observer would concentrate fire on any heavy weapons.

Captain Burger split his defences equally across the front. With only two infantry platoons he was not able to create a reserve. To deal with the threat of the English tanks he kept his artillery on board where it could fire directly.


In the descriptions of the turns, firing is shown as it is rolled for.

The number of shots equals the number of shots the unit can potentially make which is dependent on its weapons, what targets are in its line of sight, the range and whether or not it will move.
Fire means how many shots are actually made, this is dependent on the unit’s training.
Hits is the number of enemy that are hit, and this depends on the firing unit’s fire power compared to the defending unit’s armour.
Dead showing how many were not able to make their natural save or cover save.

Turn 1
English Fire Phase
The Mortar’s open fire using their observer on the hill.
Mortars fire at Artillery on Left Shots 3, Fire 2, Hits 1, Dead 1  Burger curses, the battle just began and half his artillery is gone. Haggis smiles, “this is how it works” he says to himself.
The HMGs open up on the infantry on the left. Shots 9, fire 7, Hits 7, 2 dead.

English Movement Phase
The Tanks advance while the infantry remain in cover.

German Fire Phase
With only the tanks in sight the remaining artillery piece opens up.
Artillery at tank, Shot 1, Fire 1, Hits 1, but no effect, Burger curses and Haggis breathes deeply. 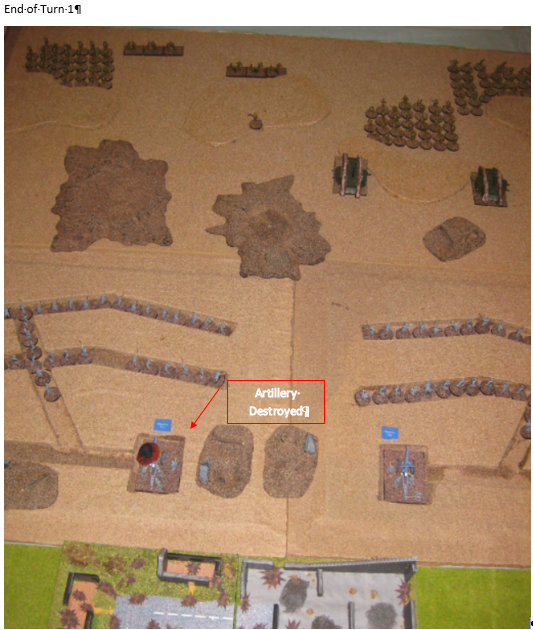 English Movement Phase
Tanks advance further and the infantry come out in support.

German Fire Phase
Artillery at tank Shots 1, Fire 1, Hits 1, the round penetrates the armour and the tank is immobilised. Burger cheers, some good news, Haggis curses.
Flamethrowers fire at the tanks but cannot get their machines to ignite and fail to fire.

English Fire Phase
Mortars fire at Artillery Shots 3, Fire 2, a miss and Hit but the hit has no effect.
HMG at Infantry on left Shots 9, Fire 5, Hits 4 and Dead 3
English Infantry on left fire while moving Shots 16, Fire 8, 6 hits and Dead 4.
Immobilised Tanks fires at Infantry Shots 12, Fire 8, 7 Hits but only 1 Dead as the German infantry duck into their trenches.

English Movement Phase
Tank overruns the flamethrower in front of it and crushes it.
Infantry advance on both sides. On the English right they move towards the crater for protection. On the Left they head towards the German trenches. 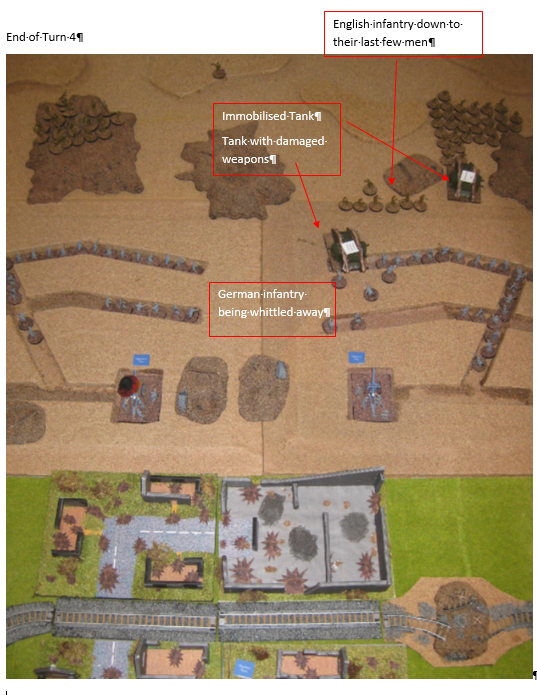 English Movement Phase
Tank overruns the torpedo man and two infantry as it advances towards the artillery.
Infantry on English left advances for the assault on the German trenches.
Infantry on the English right moves to the lip of the crater to fire. 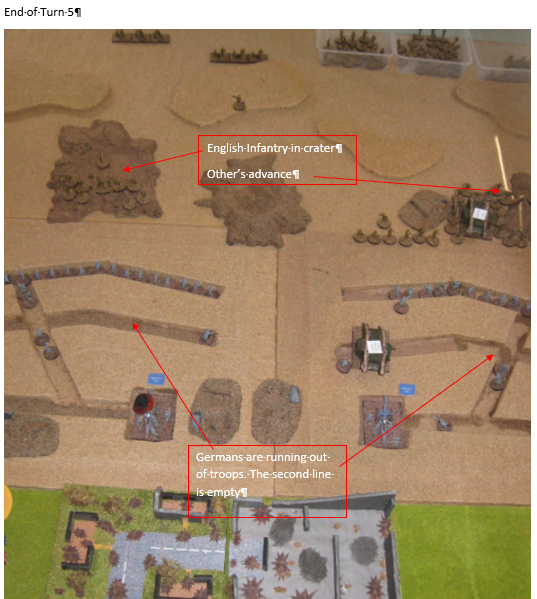 A view from the trenches

English Fire Phase
Haggis knows that this is the time on which the battle will be decided. He needs the infantry to close assault the German trenches this turn so the fire needs to be accurate.
Immobilised Tank at Infantry Shots 12, Fire 2, Hits 1, Dead 0
Infantry (remain 6) Shots 12, Fire 8, Hits 6 Dead 0
Infantry Moving Shots 13, Fire 9, Hits 7 Dead 2
Haggis curses, this means the troops may be slaughtered in the open.
The mortars target the infantry Shots 3, Fire 1, Hits 1, dead 2
On the right hand flank.
HMGs at infantry Shots 9, Fire 6, Hits 5 Dead 3
Infantry in crater Shots 22, Fire 16, Hits 12, 9 Dead

English Movement Phase
Tank overruns the artillery and some infantry.
The Infantry advance so that they can close assault but Haggis fears there will not be enough left after the German fire. 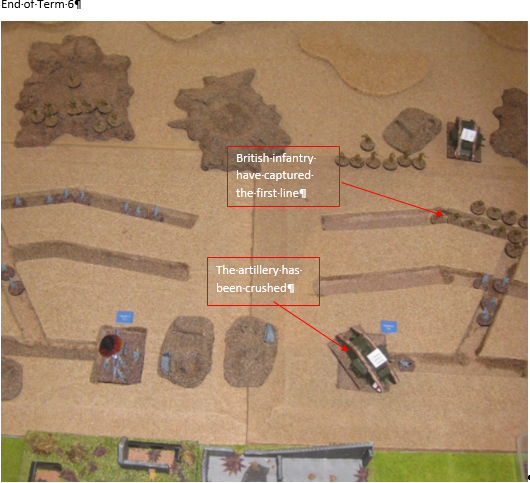 English Fire Phase
Haggis knows the battle is won. Only a few Germans remain and they are all destroyed by the final blast of fire from the remaining British troops.


German De-briefing
The General wrote to the family of Captain Burger. His wish to die to defend his country granted along with that of his fellow soldiers. Never mind thought the General, I will organise a counter attack and Ham will soon be back in our hands, Burger or no Burger.